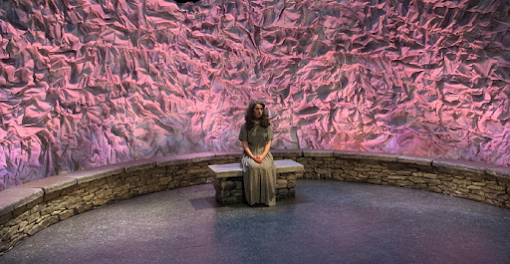 Brian Friel, sometimes referred to as the Irish Chekhov, was one of Ireland’s most beloved playwrights. Molly Sweeney is one of the last plays set in his fictitious small town near Donegal, Ireland.  It is being presented on demand by the Lantern Theater Company and will stream through February 14, 2021. The outstanding ensemble cast of Ian Merrill Peakes  (Frank Sweeney), Geneviève Perriere (Molly Sweeney), and Anthony Lawton (Mr. Rice) was filmed live in Lantern Theater’s home- St. Stephen’s Church theatre in Olde City Philadelphia. Thanks to  actor and playwright Michael P. Toner, who specializes in Irish theatre, the cast had an excellent dialogue coach.

What does it take to produce a play  from an award-winning playwright in this age of COVID-19?   According to Molly Sweeney’s director Peter De Laurier, “…3 weeks on Zoom, 2 weeks with double masks, distancing, transparent barriers, a constant flow of cold outside air and Testing! Testing! Testing!"

Although blind since infancy, Molly’s life at 41 was a meaningful one. She had learned as a young girl how to navigate the world of the blind through touch and she was very adept. Her new husband was a bit of a drifter, unemployed, and eager to have Molly undergo surgery as his pet project and a way to give meaning to his life. The doctor, Mr. Rice, a washed up alcoholic, saw the surgery as a chance to revive his once formidable career. Molly Sweeney is in effect many monologues. At the end of each a fade out occurs before a new character’s monologue begins. The lighting on each character -  Molly, Mr. Rice and. Frank- is unique, causing the set behind to change color. The colors are matched to the characters’ clothes; the clothes are matched to their moods. Additional darker clothing is added near the finish. This is a stunning cooperative effort of Scenic Designer Nick Embree, Lighting Designer Janet Embree, and the Costume Designer Leigh Ivory Clark Paradise. Tickets for this supremely well-acted and thought-provoking production are only $20 per household and are available at www.lanterntheater.org or by calling 215-829-0395. Ticket buyers will receive an email with a private access link.

Judy Cohen
I have been doing theater and occasional restaurant reviews for the past seventeen years. I presently write a syndicated column for newsletters in 55+ communities.